Why we source only conflict free diamonds

Throughout the world, diamonds are a symbol of love. That is why discovering they are sometimes used to fund acts of violence—something the public became aware of after the 2006 film Blood Diamond staring Leonardo DiCaprio—is so jarring.

Ever since the 1990’s the diamond industry has been concerned with the concept of blood diamonds, or diamonds that are used to fund civil wars and terrorist groups—notably the war between Liberia and Sierra Leone. During this conflict, diamonds were traded for weapons and training which led to a rebellion that killed millions.

Ever since this tragedy, the industry and governmental officials have talked about conflict diamonds as a way to describe gems that are sold to fund acts of war. These types of diamonds are often associated with other human rights abuses such as worker exploitation and environmental damage.

At Majesty Diamonds we are concerned about providing high-quality diamonds with clean histories. Funding acts of terrorism and warfare is unacceptable. We are proud to be conflict free and pleased that, as an industry, the sale of blood diamonds has decreased from approximately 15% to less than 1%.

We take great efforts to ensure that we never sell conflict diamonds. If ever one of our reputable suppliers was found to be in violation of international standards, we would sever that relationship immediately. 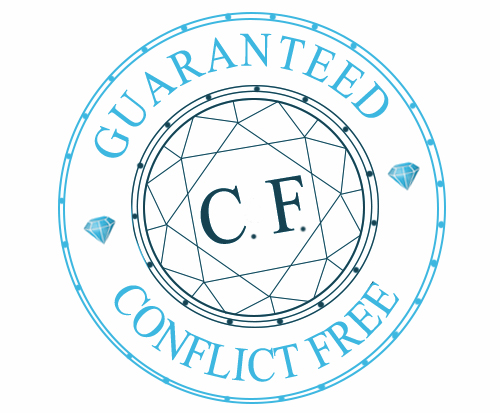 By 2003, an international governmental certification scheme was put in place in order to avoid the trade of conflict diamonds. It was called the Kimberley Process because it was established in Kimberley, South Africa. This process requires governments to certify that when rough diamonds are exported they are free of conflict diamonds and that they also comply with environmental and social regulations. By boycotting conflict diamonds, those who would buy them have no incentive to do so.

There are a number of helpful sites where you can learn more about the Kimberley Process and conflict free diamonds. Here are a couple of our favourites.

The Kimberley Process website offers information on the history of the scheme as well as enforcement information and a blog where they post current events.

DiamondFacts.org has a list of 24 important diamond facts along with practical information about what you can do to make a difference in the industry and how you can be sure to buy conflict free.